George was born in Wallasey and raised in a Christian family.  Before training for ministry, he was a Civil Engineer and worked for a consultancy practice in Birkenhead.  After four years at Oak Hill Theological college he served a curacy in St John’s Hartford, then moved to St John Over.

George is married to Kath and they have four children – Naomi, Lucy, Hannah and Joey – and a dog called Pirate.  They enjoy walks (especially Pirate) and going camping together. They all love Winsford and feel very much at home in this friendly and open community.  They especially love the church family at St John Over, which has been a huge blessing to them. 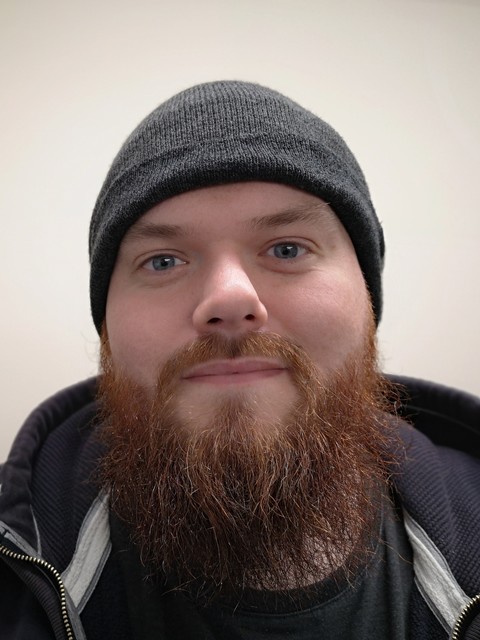 Eddie became a Christian when he was 16 years old, after years and years of having the gospel explained to him at a youth group (he’s a slow learner!)

He studied History & Politics at the University of Liverpool. Whilst living in Liverpool he was a member of Christ Church Liverpool and helped run the university’s Christian Union.

He moved back to Winsford in April 2019 to re-join the St John’s staff team and is studying at Union School of Theology.

Eddie is married to Kathryn, who’s a trained biblical counsellor. They met at church (Eddie was her bible study leader and doesn’t think he heard her speak for the first six months of knowing her) and got married in February 2018. They're soon to be joined by their first child, affectionatly known as BB-1, in mid-April.

Sarah was brought up in a semi Christian household, taken to Sunday School as a child, and confirmed at twelve years of age, but her family didn’t study the bible together and prayers were limited to bedtime. Sarah stopped going to church during her teens but attended occasionally with a Christian friend at University.

Sarah can’t say that there has ever been a damascene moment, just a growing conviction that God is in control of her life and a love for the Lord Jesus.

Sarah is still married to Alan (nearly 34 years), they have lived in Winsford for 29 years and have 5 adult children. They’ve have been at St Johns for about 25 years, and Sarah works in a school both teaching and as a 1:1

Sarah is a school governor and enjoys dancing and trying to keep fit. She also likes cooking and baking and spending time with the family.

Wendy has been a Christian for 24 years. She joined St John’s Church 5 years ago and has been organising George’s life for him for the past few years!

When she’s not looking at spreadsheets, sending out emails, or producing all the service sheets for Sunday, Wendy can be found meeting friends for coffee or lunch, swimming, gardening, or learning how to tap dance!

Ann grew up going to Sunday school and to church with her mum and always called herself a Christian, although church attendance was very sporadic during the following years.

She went back to church and started taking Christianity more seriously when she and Stuart wanted to get married.

Ann really turned to Christ after attending St John’s and hearing God’s word properly. Beginning to understand what being a Christian really means. Ann believes that she’s still learning but she is now fully committed to Christ and have seen huge changes in her life through that, for which she gives thanks to God.

Ann has lived in Winsford for 23 years, with her husband, Stuart.

Outside of church Ann had a long career as a nurse, but now works as a receptionist in a vet referral centre.

She also volunteers with the conservation team at Dunham Massey, a National Trust property in Altrincham, where she works with the collection items and the computer management system.

She also enjoys walking in the countryside and spending time by the sea.

Alan is originally from Cumbria and has lived in Winsford for the last 28 years and has been a member of St John’s that whole time.

He was brought up a Christian and has known the Lord all his life.

He’s married to Sarah, and together they have five children.

Rachel is 75 years old and discovered a different way of living in 1976 when she was 32.

Here’s her testimony: “I tried my own way of living and failed dismally!!  Following the example of a Christian family, who befriended my family when we moved to Luton and knew no-one, when we came to Winsford I knew my life had to change!”

“From that time on, through St Johns, Over, I came to know and love Jesus as a Saviour and friend through His guiding word that now leads me.   I thank God every day for the joy and peace this gives even in the difficult times in my life.”

Rachel helps out with a huge number of different ministries with church, and pretty much ran the kids work with Jean for decades! When she’s not serving at church, she enjoys spending time with her friends and family and walking in the beautiful countryside that surrounds Winsford.

Jean was born in Liverpool and brought up in a Christian home.

Jean and her husband, Tom, moved to Winsford in January 1967 and has been at St John’s for the last 40 years or so.

She has served on the children’s team for almost as long as she has been at the church. Jean and Rachel have ensured that the children who came to St John’s were taught from the bible. Jean’s been serving on the PCC for the past 30 years and spends much of her time visiting and shopping for the housebound and sick members of our church family, as well as giving lifts to anybody who needs one!

When she isn’t serving the church, Jean enjoys listening to music, reading and doing crosswords.

Huw has lived in Winsford for 12 years and has been a Christian for 7. He is married to Sharon and works for a company that assesses cybersecurity and compliance needs.

Huw is part of our Gather team and works alongside George and Eddie to ensure the faithfulness of the church’s teaching.

Huw and Sharon both enjoy horse riding and competition.